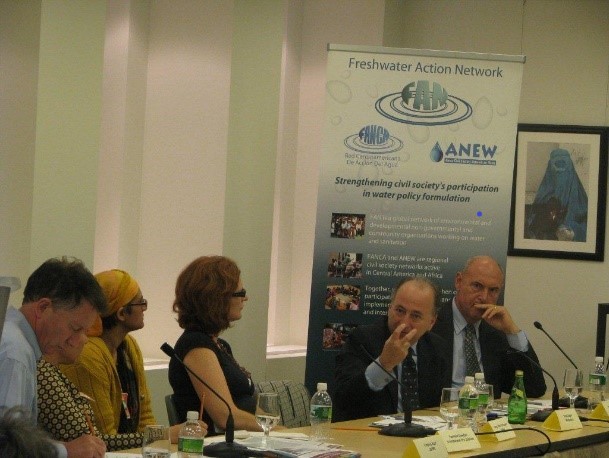 After years of feeling that its policies were unfairly criticized by civil society organizations, the Bank is now ‘turning the tables’ by being formally asked to critique civil society ideas and papers. Likewise, after years offeeling ‘shut out’ and ignored by Bank experts, CSOs are confidently seeking Bank views on their
macro- economic research findings.
This trend is best exemplified by the launches of books written by well known CSO leaders at the Bank’s Infoshop over the past two years. These include the launch of “From Poverty to Poverty” by Duncan Green (Head of Research for Oxfam/GB) in November 2008, “Development Redefined” by John Cavanaugh (Director of the Institute for Policy Studies) and Robin Broad (Professor of International Development at American University) in February 2009; and “Unheard Truth” by Irene Khan (Secretary General of Amnesty International) in October 2009. In all three cases, Bank staff were asked to be discussants and offer their critiques of the books.

The most recent example of CSOs seeking Bank input on their research is Oxfam/GB who recently came to the Bank to share the preliminary findings of a study on the impacts of the global financial crisis on poor countries. The head of research for Oxfam/Australia, May Miller-Dawkins, made a presentation on February 18, 2010 to Bank and IMF staff on the initial findings of study carried out in 11 countries involving some 2,500 individuals and studies by a range of universities and international organizations. The study concluded that while the global financial crisis has hurt the poor around the world, its impact on developing countries has not been as severe as originally feared. Many countries, societies, communities and individuals have demonstrated an unexpected ‘resilience’, a finding that Oxfam, the World Bank and IMF agreed on, even if they did not necessarily agree on the reasons. The study attributes the high degree of resilience detected to strong social networks, economic structures, and state action. The study also noted the important mitigating role of conditional cash transfer and other government programs.

An economist from the Bank (Andrew Burns, Director of the Global Macroeconomic Trends Team of the Development Prospects Group) and one from the IMF (Andre Berg, Assistant Director for the Macro-economic Division / Research Department) were asked to comment on the research. Both commended Oxfam for seeking Bank input before the report is finalized, and noted that much of the Oxfam study findings mirrored the conclusions of similar Bank studies, particularly the focus on resilience and how volatility can affect the poor. Both also suggested however, that the Oxfam report could benefit from macro-economic and historical analysis that would explain why developing countries were able to cope better with this crisis than previous ones. Berg noted that IMF research found that much of the resilience demonstrated by developing countries is directly related to the financial reforms they undertook in the decade before the crisis. He cautioned, however, that the crisis is not over and that developing countries may build up large debts as they attempt to climb out of the crisis. 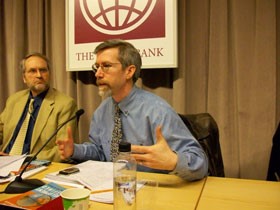 The World Bank has been engaging a wide variety of policy advocacy CSOs on the issues of access, rights, and financing of urban water and sanitation programs over the past five years. Of particular concern to CSOs have been the issues of water privatization, cost-recovery approaches, and lack of affordable water services for low income populations in Bank-financed water and sanitation projects. For its part, the Bank has welcomed this dialogue because it clearly shares with civil society the goal of extending universal coverage to the poor in developing countries and improving delivery effectiveness. Within this context, the Bank has undertaken a watershed process of meetings and joint research with leading NGOs, trade unions, and research centers. The Bank’s most significant civil society interlocutor to emerge during this period has been the Freshwater Action Network (FAN), which is an international coalition of several hundred CSOs in Africa, Asia, and Latin America who work on water and sanitation issues.

Engagement activities have included a two-day workshop on urban water and sanitation during the World Bank Water Week in February 2007 in Washington, DC, a Political Café discussion on the right to water during the Annual Meetings in October 2008 (see photo), and a “scoping study” on how to promote more systematic dialogue on water and sanitation issues.  The “FAN–World Bank Scoping Study about Developing Dialogue between the World Bank and Civil Society Organizations about Urban Water and Sanitation Services”,  which was carried out by Public World, was a thorough and thoughtful analysis of the characteristics, constraints, and opportunities for Bank-CSO engagement on the issue of water. More recently, FAN and the Bank have been working on several research products including developing a “handbook” for CSOs on how to engage the Bank around water policies, and producing a “guidance note” for Bank staff on how to engage civil society.  Both are geared to generate lessons and encourage greater Bank, government, and civil society engagement.  The most recent initiative was a video conference held on April 21, 2010 between several dozen FAN members and Bank managers / staff to discuss the draft handbook and guidance note.

The promising and intriguing aspect of this initiative is that water has always been one of the most controversial and complex issues for Bank – CSO policy dialogue.  One only need remember the citizen protests in Cochabamba, Bolivia when the system was privatized a few years ago, which many attributed to the Bank even though it was not directly involved in the decision.  What has made this dialogue so challenging is that it has tried to bridge the views of water as both a human right and a service which must be financed.   While there are still some disagreements, this carefully constructed process of dialogue and joint research has already resulted in a better understanding of each other’s roles in advocating for and financing water services.  The hope is that this engagement process will eventually lead to greater government – civil society collaboration at the country level geared to promoting affordable and clean water for the poor.