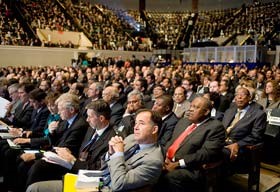 This question may have been hard to respond in the affirmative some years back, as Civil Society Organization representatives were still a rare sight at the Bank. It may be hard to believe today, but 20 years ago visiting CSOs had to be physically escorted throughout the buildings, and it was not uncommon for some CSOs to be refused entry. Today, CSOs are actively welcomed and some even have long-term building passes to facilitate their daily meetings at the Bank. As a matter of fact, the recently concluded Annual Meetings represented a milestone for CSO presence at the Bank. Not only was it the largest gathering of CSOs in a Washington-based AMs, but CSO leaders were invited, for the first time, to participate in the official Opening Plenary.

A total of 400 civil society representatives from over 62 countries attended the AMs (see list of accredited participants). As in past years, the Bank and Fund also sponsored CSO representatives from developing countries to attend in order to ensure that Southern voices and perspectives were well represented. A total of 37 CSO Fellows came from 32 countries and represented a variety of organizations (i.e. NGOs, trade unions, think-thanks, and faith-based groups) and thematic areas (education, environment, youth, economic development, and governance). (see list of CSO Fellows)

CSO representatives also participated actively and/or hosted a number of policy dialogue sessions during the Civil Society Policy Forum (CS Forum) which was held from October 6 – 10 and comprised 50 sessions. CSOs held numerous bilateral meetings with Bank Executive Directors, senior managers (Vice Presidents), and regional staff. CSOs also had an opportunity to engage with WBG President, Robert Zoellick and IMF Managing Director Strauss-Khan at the CSO Townhall and Reception which has become a traditional feature of the Annual Meetings.

The most significant indication, however, of how open the Bank’s doors are for CSOs was the fact that a group of 25 CSO leaders were invited to attend the Opening Plenary of the Annual Meetings. This event, headlined by the 187 Finance Ministers, featured speeches by the Bank President and IMF Managing Director. When asked about the significance of having been invited to attend, Peter Bakvis of the International Trade Union Confederation (ITUC) stated that “We are pleased that the WB and IMF have, for the first time, invited civil society representatives as observers to this official event as a sign of greater openness. Increased transparency allows the institutions to get better feedback from constituencies affected by their policies and helps CSOs be more effective in their monitoring role.”