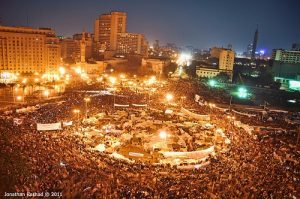 While it may take historians years to understand the historic conditions and political factors which triggered the democratic revolution in Tunisia, Egypt, and other countries in the Middle East, one thing seems to be certain.  The political actor which has gained the most prominence in these political uprisings has been ‘civil society’. This term encompasses the large sector within any given society which sits between governments and the for-profit or private sector.  As such it includes youth movements, workers unions, NGOs, political parties, and faith-based organizations among others.  It is a term still little understood, often derided by authoritarian governments, and rarely heard in the Middle East until now. The term in Arabic is “mojtama’a madani” and has the same broad meaning as in English.  It is said that when Egyptian ex-President Mubarak first heard the term he mockingly quipped, “So what’s wrong with military society?”

A good indication of how visible and prominent the civil society term has become is how often it is being repeated by CNN and Al Jazeera pundits and political leaders such as British Prime Minister Cameron and Secretary of State Clinton.  As a matter of fact, Secretary Clinton took advantage of the events in the Arab world to hold a first ever “Strategic Dialogue with Civil Society” on February 16 at the State Department.  She was joined by civil-society representatives from more than 20 countries and thousands more who participated in the event through videoconferences in 50 countries.  She stated that if “we’re going to take advantage of this historic moment (in the Middle East), we have to tap the expertise, experience, and energy of civil society”.  She also noted that both she and President Obama “have deep personal connections to civil society. He began his career as a community organizer; I began mine as an advocate for women and children’s rights. Both of us are committed to defending civil society”.

Egyptian activist Sherif Mansour, who was also present at the State Department event, added that the uprisings in his country can only be “attributed to people in Egypt and Tunisia who proved that ultimately civil society is a change-maker and the permanent partners for the U.S. in the long run”.  Other prominent global civil society leaders have also noted the emergence of civil society in the Arab world.  Ingrid Srinath, Secretary General of Civicus, stated in a recent article that the only path to stability in the region “are grounded in the rights to freedom of association, expression and assembly so that civil society can play its entire spectrum of roles” including promoting free speech, organize peacefully and hold governments to account.

At the World Bank we have increasingly come to realize how important civil society is, and that is why we actively engage CSOs through policy consultations, joint research, grant funding, and operational collaboration. While we increasingly engaged civil society over the past decade in the Middle East, the recent events will certainly accelerate this process.  As Shamshad Akhtar, World Bank Vice President for the Middle East, said at a speech in Brussels on February 23: “The democratic movements provide a unique opportunity to leverage people and civil society power to change the landscape of the Middle East and North Africa”.