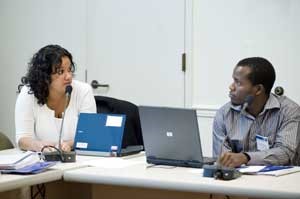 The World Bank has experimented with different approaches to including civil society organizations (CSOs) in its decision-making processes over the years. These have varied from regular policy dialogue with CSOs through the Bank – NGO Committee in the 1980s and 1990s, to establishing CSO advisory committees in several Bank units during the 2000s.  Currently, two of these initiatives stand out: the Bank’s Climate Investment Funds have invited 19 CSO representatives (chosen competitively through online voting) to serve as ‘active observers’ on its five Committees and Sub-Committees; and the Bank’s Health Unit has established a CSO ‘consultative group’ to which it invited 18 CSO leaders to advise the Bank on its health, nutrition, and population agenda.

While some of these approaches have worked well they are quite varied – each approach has had its own objectives, characteristics, and results – and are still largely considered experimental in nature.  The challenge for the Bank on this front is twofold.  First, civil society is so large and varied that it is difficult to know who exactly should represent civil society on the Bank’s advisory panels, and thus the issue of representation comes up time and again.  Second, there isn’t consensus among the Bank’s government shareholders that CSOs should be given a seat at the governance table since they aren’t elected and/or don’t have the legal status of governments.

Interestingly, the Bank’s tentative experience with civil society participation in its governance structure contrasts with the track record of the United Nations where CSOs have historically had more access and representation space. CSOs are not only invited to present statements and even make speeches during the General Assembly and large thematic conferences, but    several agencies (i.e. ILO, Unaids) include CSOs as formal shareholders on their boards.  What is curious about this situation is that it is the same 180+ governments who mandate such differing institutional approaches at the UN and the WB to engaging civil society.

Perhaps the most significant approach undertaken by the Bank to date to include civil society in its decision making has been CSO involvement in the Global Agriculture and Food Security Program (GAFSP).  Established in April 2010 to promote food security in low-income countries, it is a muti-donor trust fund with the Bank serving as the trustee and administrator. To date, the GAFSP has raised nearly $1 billion dollars and supported projects in 12 countries. The Fund is governed by a 26 member Steering Committee composed of 12 voting government representatives, and 14 non-voting members including donor agencies (i.e. FAO, WFP, IFAD) and three CSO representatives from: Africa (Pan African Farmers Organization), Asia (Farmer and Nature Net), and North America/Europe (Action Aid).  Interestingly, the Gates Foundation (which is a CSO) participates as a voting member alongside governments having contributed $30 million.

CSO participation in the GAFSP has been considered to be quite positive to date.  Not only have the CSO representatives participated actively in project financing decision meetings, but have helped draft a guidance note to encourage governments to include CSOs in local project design and implementation.  US-based CSOs have even written to the US Congress requesting additional funding for the GAFSP.  There seems to be several reasons for why this experience has worked.  First, while the CSO and donor agency representatives are not voting members, the SC decided to operate by consensus thus defusing what could have been a potentially divisive factor.  Second, the GAFSP chairmanship and secretariat have taken practical steps to manage the meetings in an inclusive manner and operate as openly as possible, thus building trust among the Committee members. Third, the CSO representatives (whose cost of participation is covered by the GAFSP) have been willing to be pragmatic and iron out disagreements with government representatives in order to achieve their goal of ensuring that the GAFSP support more pro-poor and small farmer-oriented agricultural initiatives.

Several important lessons can be gleamed from the Bank’s attempts at providing CSOs a seat at the table. First, while the existence of these mechanisms is significant, the most important success factor seems to rest on how they are managed, and whether the methodologies employed lead CSOs to feel that their input is valued and being fully considered. Second, as the GAFSP example demonstrated, CSOs can provide useful methodological input and provide strategic political support.  With the expected launch of the proposed civil society support facility in which CSOs are expected to be full members in its governing body, we may be entering a new, more institutionalized phase in CSO participation in Bank governance.  Stay tuned…