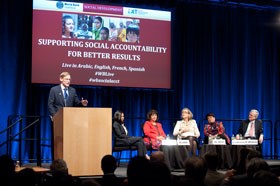 A record number of CSOs participated in the recently concluded Spring Meetings in Washington.  Over 550 civil society representatives – 200 more than in 2011 – attended the Civil Society Program which spanned five days from April 17 to 21.  Of these, the Bank and Fund sponsored 29 CSOs / Youth Leaders and Academics (see list) from developing countries in order to ensure that voices and perspectives from southern civil society and young people were adequately represented at the Spring Meetings. These sponsored participants participated actively in a week-long schedule of events, including numerous bilateral meetings with Bank and Fund senior managers.

The Civil Society Program included a CSO Roundtable with Executive Directors, an orientation session on the WB and IMF, Civil Society Policy Forum (CS Forum), and a high-level panel on Social Accountability. The CSO Roundtable was co-sponsored by the Directors from Brazil, Kuwait, and United States, and was characterized by a frank and constructive discussion between some 20 Executive Directors and 40 CSO representatives on the role of governments at the Bank and Fund, impacts of the global economic crisis, and ways to intensify engagement with civil society.

The CS Forum comprised some 45 sessions on a wide range of topics including safety nets, youth unemployment, energy policies, safeguards, and aid effectiveness. Most of the sessions were organized by CSOs (i.e. Oxfam, Basic South Initiative, Bank Information Center, and World Resource Institute) although the Bank and Fund also organized consultation meetings on numerous topics such as debt sustainability and development policy lending. At the end of the Forum, there was a planning session with Japanese CSOs on the upcoming Annual Meetings which will be held in Tokyo on October 10 – 12, 2012. See Forum schedule for a list of panelists and description of each session.

The highlight of the CS Forum was a high-level panel on Social Accountability, which involved Bank President Robert Zoellick, government official, and several well known CSO leaders. Zoellick, announced (see press release) the establishment of the Global Partnership on Social Accountability (GPSA) will invest in projects to support social accountability, as well as focus on exchanging knowledge of best practice. The Bank plans to invest $20 million in seed money to create the Partnership and will work with other donor agencies to raise additional funds.  He also explained that while the mechanism was approved in principle by the Board of Directors, the Bank will launch a second phase of consultations with civil society and other stakeholders through June to work out the details of the mechanism which is expected to become operational in July.  (see  GPSA website for details on consultations going forward)

The growing number of CSOs attending the Bank/IMF Meetings reflects a historic trend in improved Bank – CSO relations.  In addition to having ready contact to Bank officials, what seems to be driving this increase is the fact that the CS Forum offers an independent and credible space for policy dialogue.  CSOs are encouraged to determine the topics, format, and panelists for their own sessions, and this has led to substantive and frank exchange of views in areas of common concern.  The recent session sponsored by Human Rights Watch and several other CSOs on “IFI Re-engagement in Burma: Challenges and Opportunities”, for instance, demonstrates how timely and constructive the dialogue has become. There was widespread agreement among the CSOs, World Bank, IMF, and Asian Development Bank panelists that re-engagement needs to be accompanied by significant governance reforms and undertaken within a framework of transparency and accountability.  This common understanding was exemplified in a press statement released by the Bank on April 26 about its re-entry into Myanmar which states that in addition to working with the government and other donor agencies “we’re also working with civil society organizations to support the important work they are doing to encourage transparency and accountability”.