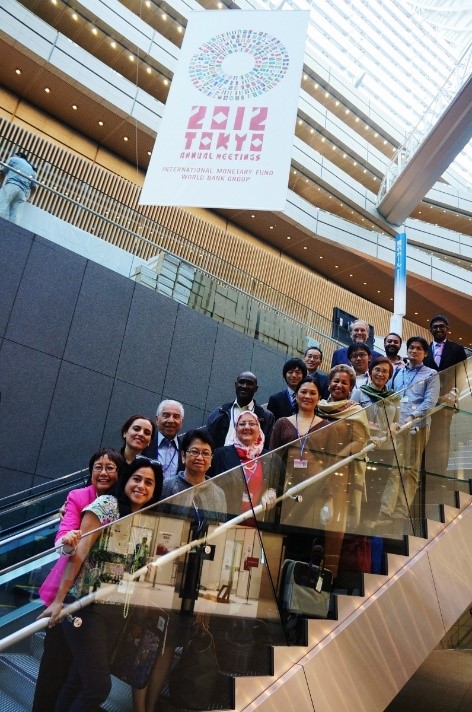 Involving CSO representatives in the planning process for the Civil Society Program has led to increased and more substantive civil society participation at the Annual Meetings over the past few years. This was vividly exemplified at the recently concluded Annual Meetings in Tokyo which witnessed the largest number of CSO participants and policy sessions to date.  The cornerstone of this participatory approach was the convening of a CSO Planning Group composed of 17 CSO and Youth Leaders from throughout the world invited to help plan the CSO Program (see photo and list).

Increased CSO participation in Tokyo was most evident in the number of CSOs who attended the Meetings.  A total of 635 CSO representatives from a wide range of constituencies such as NGOs, labor unions, youth groups, faith-based organizations, and foundations participated.  The Bank and Fund also sponsored the largest number of CSO / Youth Leaders and Academics – 56 from to 45 developing countries – who travelled to Tokyo to ensure that Southern voices and perspectives were represented (see sponsored CSOs list).  They participated in a week-long schedule of events which began with an orientation session on the Fund and Bank and included attending the Opening Plenary of the Annual Meetings which featured Crown Prince Naruhito.

Greater civil society involvement was also witnessed in qualitative terms by their greater involvement in policy dialogue sessions and high-level events.  The Civil Society Program was held from October 8 – 13 and comprised a CSO Roundtable with Executive Directors, a CSO Townhall with the heads of the Bank and Fund, and the Civil Society Forum.  The CSO Roundtable was quite interactive and covered a number of issues including the challenges of addressing corruption, spillover impacts of the Eurocrisis on developing countries, and scope of the Bank’s safeguards review.

The CSO Townhall with IMF Managing Director Christine Lagarde and World Bank President Jim Yong Kim, was attended by some 250 CSO representatives and focused on global economic recovery, need to strengthen the civil society sector, key role of promoting gender equity, and universal health care.  Mr. Kim also announced a bold Bank initiative called “WhatWillItTake” geared to eradicating poverty.  He cited Martin Luther King on the need to “bend the arc of history” and go beyond dreaming of a world free of poverty to achieving it.  The campaign was manifested through “End Poverty” T-shirts worn by many participants and an “Ideas Wall” which received hundreds of comments and recommendations for ending poverty.

The Civil Society Policy Forum had 60 sessions – the largest number ever – on a wide range of topics including: global health; social and environmental safeguards; disaster recovery and resilience; youth employment; post-MDGs agenda; debt re-structuring; and food security. (see schedule).  Most of the sessions were organized by CSOs separately or jointly with the Bank and Fund, and included over 250 panelists.  Six Bank Vice Presidents and other senior managers participated in policy sessions or convened bilateral meetings with CSOs over the four days of the Forum.

Incorporating the successful experiences of Annual Meetings held in Singapore (2006) and Istanbul (2009), the Bank and Fund Civil Society Teams convened a CSO Planning Group to help plan the Civil Society Program.  The Group held several conference calls and email exchanges in the months leading up to the Annual Meetings to discuss the format and content of key CSO Program sessions and organize their own policy sessions for the CSO Forum.  They also helped select the CSO moderator and CSO discussants for the CSO Townhall and CSO Roundtable.

What this process clearly demonstrated is that the participatory planning process was effective in engendering a high level of civil society participation in the Annual Meetings.  It also allowed for building greater trust between the Bank and CSOs which, in turn, generated more frank, substantive, and useful  policy dialogue on a number of politically-sensitive issues such as Myanmar re-engagement, impacts of the Fukushima nuclear disaster, and IFC’s Doing Business report.

Adopting this participatory approach has been a learning process for the Bank which has moved from a Bank-driven to a civil society-geared approach in engaging civil society over the past decade.  After unsuccessfully attempting to set up a Bank-proposed global CSO advisory body some 10 years ago, the Bank now focuses its outreach efforts in improving the quality and reach of the engagement sought out by CSOs at the Annual / Spring Meetings, during consultation processes, and through other modalities.  The Bank’s Civil Society Team has also honed its participatory approach by listening to the feedback provided by CSO participants via regular evaluations carried out after each Annual and Spring Meetings.  (See one of the tables of 2012 Spring Meetings participant’s assessments above and the complete results here.)  In short, the Bank has learned that employing effective participatory approaches promotes greater ownership, builds trust, and increases participation.