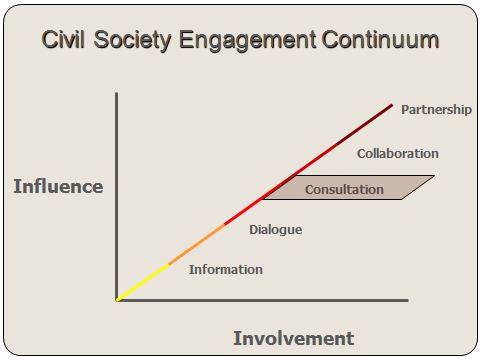 The Bank has learned a good deal about how to consult civil society over the years. The absence of consultation policies led to some of the most visible CSO advocacy campaigns opposing Bank-financed projects, such as the Narmada Dam in India and the Polonoreste Project in the Brazilian Amazon in the 1980s. Thus, while this third step on the civil society engagement continuum has been one of the most difficult to ascend, it has also shown the clearest progress in terms of more effective consultation practices.  As the latest edition of the World Bank–Civil Society Engagement Review of Fiscal Years 2010–12 demonstrates, today the Bank consults CSOs widely on its strategies, policies, programs, 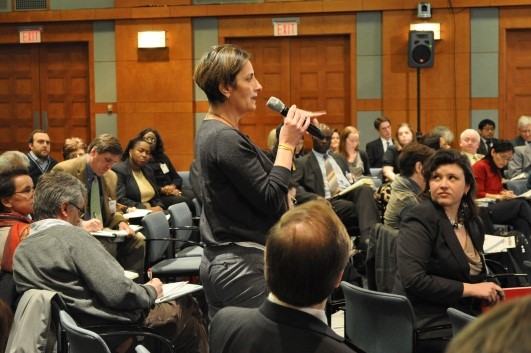 At the global level, the Bank held nearly two dozen multi-stakeholder consultations during 2010 and 2012 on such policies as environment, access to information, and social accountability (see photo). These consultations were conducted via face-to-face meetings, videoconferences, online email submissions, and web-based discussions. Just in terms of meetings, more than 600 public consultation meetings were held in over 100 countries, gathering the views of about 13,000 stakeholders.

The breadth and scope of each of these consultation processes varied depending on the breadth of the topic, expressed interest by various stakeholder groups, and the scope of the consultation plans. As the graph below demonstrates, the largest share of multi-stakeholder consultation meetings were held in Africa (29 percent), followed by Europe (18 percent), East Asia and Pacific (12 percent), and other regions. 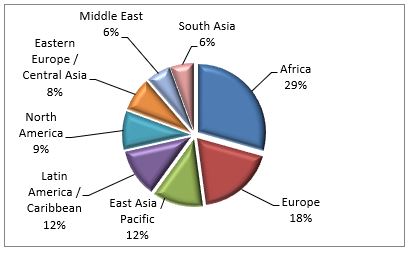 While Bank consultations were generally multi-stakeholder in nature, CSOs constituted the largest constituency in most consultations. As the graph below shows, CSOs represented 39 percent, followed by government (23 percent), consultants and individuals (12 percent), and other stakeholders. 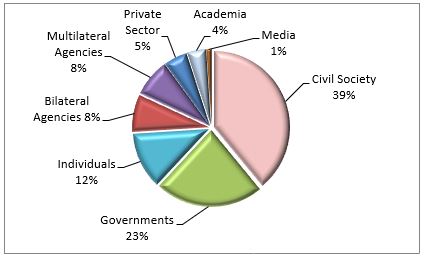 The perspectives and recommendations made by the broad range of civil society constituencies during these consultations improved the quality and impact of Bank policies and programs.  This was evidenced for instance with the Access to Information policy consultations in 2011 in which CSOs such as the Bank Information Center and the International Budget Project provided valuable feedback and technical assistance (see details) during the consultation and planning phase of the consultation process. 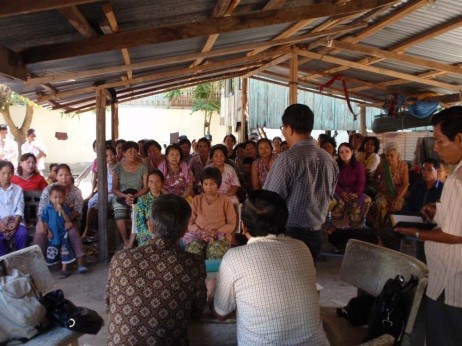 Although consultations at the global and regional levels are more visible, the most intense and ongoing levels of consultations occur at the country level, where the Bank carries out most of its development work. The most important consultations undertaken at the country level were related to the drafting of Country Assistance Strategies (CASs) and Poverty Reduction Strategies (PRSs). The venues and formats used to consult with CSOs on CASs and PRSPs included the media, opinion surveys, focus group meetings, public forums, and web-based platforms (see photo). The Review found evidence of civil society participation in 106 (82 percent) of the 129 CAS related documents approved by the Bank’s Board during fiscal 2010 – 2012. As the graph below shows, CSOs were consulted in 53 of the 59 CAS documents (90 percent), 37 of the 52 CAS Progress Reports (71 percent), and 16 of the 18 Interim Strategy Notes (89 percent).

CSOs were also consulted heavily during the preparation of the Poverty Reduction Strategies.  A desk review carried out by the Civil Society Team found there was some form of CSO participation in ALL of the 28 PRSP documents prepared during the three-year period, representing 100% coverage.

It is important to note, however, that the scope and intensity of the CAS and PRSP consultations varied across countries and was based on several factors including the: i) proactive nature and effectiveness of Bank outreach efforts; ii) openness and ability of governments to reach out to civil society; and iii) level of CSO activism and capacity to engage. For this reason, while it is clear that the Bank has made important advances in its consultation approaches, it still needs to improve the consistency and quality of its consultation efforts across the institution.  The Bank is in the process of developing new uniform consultation guidelines for Bank staff which should prove quite useful when launched in the coming months.