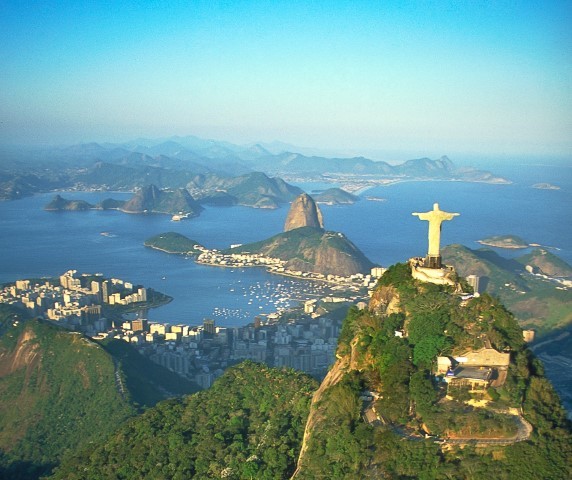 Unlike the 1984 movie “Blame it on Rio”, which attributed a bawdy affair between a middle-aged man (played by Michael Cain) and a teenager on the tropical vibes of the stunningly beautiful city, the recent hosting of the Rio +20 Conference served to showcase a different face of the Rio ambience — its global environmental leadership role.  The city not only maintains the world’s two largest urban forests, Pedra Branca and Tijuca (see photo), but has just completed a state of the art waste treatment center which will allow for a 8% reduction in greenhouse gas emissions, and are installing 300 kilometers of bicycle lanes.  For the World Bank, the city has been the setting for the improbable significant improvement in relations between the Bank and environmental CSOs over the past 20 years.

When Rio hosted the original UN Conference on Environment and Development in 1992, the Bank participated with a small staff delegation and its modest publications booth at the parallel NGO “Global Forum” held on Flamengo Beach was set on fire by environmental activists.  They were protesting the Bank’s financing of the Narmada Dam project in India which threatened to displace hundreds of thousands of small farmers without a fair and sustainable resettlement plan in place.  Some were expressing disapproval of the Polonoroeste project funded by the Bank in Brazil where the paving of a highway linking two Amazonian state capitals led to widespread deforestation in the 1980s.

The Bank was only beginning to adopt environmentally and socially-friendly policies in the early 1990s, but since then it has supported a series of unprecedented policies, programs, and projects.  Partially due to the Narmada experience, the Bank adopted 10 safeguard policies which now guide all involuntary resettlement, indigenous peoples, and environmental initiatives funded by the Bank.  In 1993 it established the Inspection Panel, the first of its kind among multilateral development Banks, which is a complaint mechanism for people who believe that they may be adversely affected by Bank-financed operations.  Today the Bank is playing a leadership role in addressing climate change by financing adaptation and mitigation in over 130 countries, and administering the Climate Investment Funds which is leveraging more than $40 billion in clean investments.

In Brazil the Bank has also supported a number of ground-breaking environmental and biodiversity protection initiatives since 1992.  One of these was the Pilot Program to Conserve the Rainforest which strengthened government environmental protection programs, financed biodiversity research, and supported NGO and indigenous people’s organizations throughout the Amazon.  More recently the Bank funded a $1.3 billion Sustainable Environmental Management loan with the Brazilian National Bank for Economic and Social Development (BNDES) to support environmental and social policy reform.  Partly as a result of this financing, Brazil has made important strides in implementing environmental policies.  The Brazilian government was responsible for establishing 74 per cent of all environmental protection areas created around the world from 2003 to 2008, and has reduced deforestation rates by 66% since 2005.

This improving environmental footprint is well exemplified at the Bank’s evolving contact with CSOs at the two subsequent Rio environmental conferences.  At the Rio +5 Conference held in 2008 then Bank President James Wolfensohn met for the first time with a dozen Brazilian CSO leaders to discuss the Bank’s environmental and macro-economic policies.   During the Rio +20 Conference this past June this engagement went beyond policy dialogue to include numerous panel discussions, technical workshops, and even program partnership launches.   The events included a session on ecosystem valuing co-sponsored with International Institute on Environment and Development (IIED), simulation workshop with Latin American youth, and the launch of the Global Partnership on Oceans which is supported by 27 CSOs including World Wildlife Fund, Conservation International, and Environmental Defense Fund.

In short, in addition to Rio’s well known romantic ambience as immortalized in the Girl from Ipanema song, the ‘Spirit of Rio’ also encompasses its growing international environmental leadership role.  The Bank, for its part, can certainly thank Rio for having provided a propitious setting for improving relations with civil society and launching ground-breaking environmental initiatives.