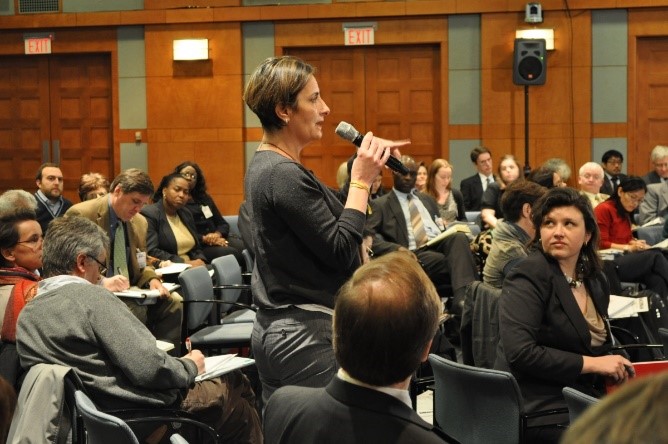 This was a question asked by numerous participants during a consultation meeting held in Washington on February 29 on the Bank’s proposed Global Partnership for Enhanced Social Accountability (GPESA).  They noted that this lack of trust comes from a longstanding view that the Bank tends to favor governments in detriment of the broader society in many developing countries.  Others noted that the lack of trust comes from the perception that the Bank is not accessible and does not effectively engage civil society in some countries. This contrasts with the view, expressed by several participants, that the Bank has made important strides in opening up and reaching out to civil society at headquarters over the past decade and that this positive momentum should guide GPESA implementation.

Some 50 representatives of Washington-based CSOs, universities, government agencies, and Africa Diaspora organizations participated in the 3-hour GPESA consultation meeting. (see agenda and participants list).  The session began with welcoming remarks by WB Vice President Sanjay Pradhan, who stressed the unprecedented nature of this initiative, and a presentation on GPESA was made by Mary McNeil, Senior Operations Officer.  Sam Worthington, CEO of InterAction, provided discussant remarks which helped to frame the discussion which ensued.  The meeting was part of a comprehensive global consultation process which began on January 1st and will span through June 2012 involving face-to face and/or video conference consultations with CSOs in over 40 countries, mostly in Sub-Saharan Africa and the Middle East & North Africa.   (see GPESA website for details)

Participants also raised a number of issues and practical suggestions for ensuring that the new social accountability initiative has the desired impact. (see summary note) They suggested that this initiative use a broad definition of civil society which would not only include NGOs but informal citizen’s networks worldwide.  They suggested that the Bank take into account the unequal power relations between Northern and Southern civil society in order to ensure that GPESA primarily benefit the latter. Participants also suggested that the Program support existing networks such as Civicus and the Affiliated Network on Social Accountability (ANSA) in order to broaden its interaction with civil society and avoid duplicating existing social accountability in this area.

A number of participants referred to the sensitive political nature of the initiative in some countries, and recommended that the Bank should start slowly and employ a ‘light touch’ in the beginning.  That way it can learn from the process, avoid common pitfalls, and make needed adjustments going forward.  In this light, it would be important to support successful examples of CSO – government collaboration early on in order to convince skeptical governments that social accountability efforts can be a ‘win-win’.  Several participants noted that GPESA’s governance structure should be small and nimble, but that it will need to ensure meaningful participation by civil society.  There were varying views, however, on whether CSO representation should be self-selected or appointed by the Bank.  The other governance challenge is to ensure that Bank Country Offices, and particularly Country Directors, are fully engaged in GPESA implementation to ensure that it is integrated into the Bank’s broader country program.

For those wishing to add their own voices to this substantive and lively discussion there is still time and we encourage you to do so.  You can either participate in upcoming consultation meetings across the globe (see schedule) or via our online form.