Caption: Jim Kim with Steering Committee Members at the “Social Accountability and the Science of Delivery” roundtable session on December 17, 2012. Photo:  Ryan Rayburn

After an extensive consultation process and over a year of planning, the Global Partnership on Social Accountability (GPSA) is getting off the ground with the first call for proposals just announced on February 11, 2013. With its transparent policies, inclusive governance structure, and strategic thematic focus on social accountability, the GPSA clearly represents a milestone in Bank – civil society relations. After 30 years of engaging civil society through policy dialogue, consultation, and funding, the establishment of GPSA is a clear signal that the Bank intends to institutionalize and scale-up its support to CSOs.

The idea for the GPSA emerged from a speech former Bank President Zoellick made at the Peterson Institute in April 2011 in the wake of the Arab Spring, in which he spoke of the need for a new social contract between citizens and governments.  He indicated that the Bank would explore with its shareholders means to support CSOs working on social accountability.  This was followed by an extensive multi-stakeholder consultation process conducted on the design and scope of the proposed fund.  From January through March 2012, more than 870 stakeholders from 57 different countries participated in 25 face-to-face meetings and video conferences organized across the world. In addition, nearly 300 persons submitted written comments online directly onto the GPSA website.  As a result, several CSO recommendations were incorporated into the design of the GPSA such as the need to support core and longer term funding of CSOs, and ensure that CSOs had adequate representation on its governing body. 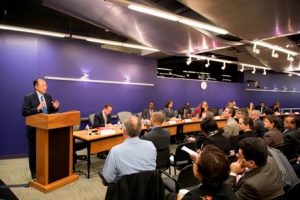 The GPSA was formally approved by the Bank Board in June 2012 and will make long-term grants available to CSOs, through a competitive selection process, to carry out social accountability capacity building, networking, and operational activities. The GPSA will also create a global platform for knowledge exchange and research in order to document and disseminate good practices and lessons learned on social accountability. Governments around the world are being invited to opt-in to the program so CSOs in their countries can have access to the funds, and twelve countries from five regions have done so far: Bangladesh, Dominican Republic, Honduras, Indonesia, Kyrgyz Republic, Malawi, Moldova, Mongolia, Mozambique, Philippines, Tajikistan and Tunisia.

The GPSA’s Steering Committee was convened for the first time on December 17, 2012 and joined a roundtable presided by Bank President Jim Yong Kim. (See photo). The “Social Accountability and the Science of Delivery” Roundtable brought together representatives from governments, CSOs, donor agencies, and Bank staff to discuss the issue of making service delivery more effective to address citizen needs. Panelists shared various country experiences which showed that when citizens are heard and governments are held accountable, the delivery of services becomes more effective and sustainable. Mr. Kim stated: “with the Global Partnership for Social Accountability, the Bank now has an effective instrument to complement the work of governments and the private sector in finding solutions to end poverty and boost shared prosperity.” The Steering Committee also held its first planning meeting on the same day to discuss GPSA’s strategy for the first year, grant making procedures, a framework for measuring results.

The GPSA is unique for several reasons.  First, it will provide longer term funding (3 -5 years) to CSOs as well as cover some of their institutional costs.  Second, the GPSA is the first Bank-managed funding mechanism to have CSOs with full representation on its governance structure.  The CSO representatives not only have the same number of seats – three – as the government and donor agencies representatives on the 10-member Steering Committee (which is chaired by the World Bank), but have the same voting power to select projects to receive funding and give overall direction to the program. The three CSO representatives, who were selected after wide consultation with international and regional civil society networks, are: Said Issa (Grassroots Manager, Transparency International / Lebanon), Akwasi Aidoo (Executive Director, TrustAfrica / Senegal), and Lindsay Coates (Vice President, InterAction / US). The other Steering Committee members are representatives from three governments (Malawi, Dominican Republic, and Bangladesh) and three donor agencies (Department for International Development /DfID, Finnish Aid, and Ford Foundation). In addition, 15 international CSOs have joined as partner organizations to collaborate on the knowledge-sharing and networking activities. (see list on GPSA website)

To date, the GPSA has secured $23 million dollars ($20 million from the World Bank and $3 million from the Ford Foundation) and more donor allocations are expected. The first Call for Proposals is being disseminated widely through various means at the country level, including newspapers and electronic media, as well as via GPSA’s website.  CSOs from opted-in countries will be able to submit proposals through an online submissions platform that will be accessible from the GPSA website.  World Bank Country Offices held consultation meetings with CSO and government stakeholders to adapt the call for proposals to country priories, and will also hold orientation sessions for CSOS interested in submitting proposals. The funding range will be from $500,000 to $1 million per grant, and grants will be provided for a 3-5 year period. After the call for proposals closes on March 14 grant applications will undergo a two-stage review process, which are explained in the application guidelines.