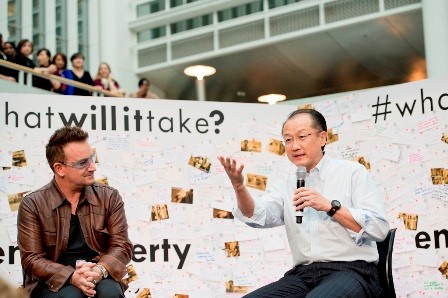 International rock star Bono recently visited the World Bank where he was hosted by Bank President Jim Kim (see photo).  In a packed and electrifying session, moderated by CNN news anchor Isha Sesay, Bono and Kim talked about corruption, transparency, food security, and gender inclusion.  Bono called on the Bank to join civil society efforts to fight for the end of poverty.  While praising the Bank’s recent open development reforms, he noted that open data and transparency would “turbo-charge” the fight against extreme poverty as it will shine a light on this urgent problem.  He jokingly referred to Bank economists as “jedis for development” and said that he never thought he would say publicly “I want to go work for the Bank.”  As the head of One, Bono has been an effective advocate for greater aid to Africa over the years.  One reason for his success has been his willingness to work with both donor and recipient country governments to push for greater aid.  In the US, he has reached out to both Democrats and Republicans in the US Congress to lobby for foreign aid, and is credited for having convinced the Bush Administration to sharply expand funding for Africa and HIV/AIDS in the mid-2000s.

During the session, Jim Kim talked about the recently launched anti-poverty campaign whatwillittake which is eliciting ideas about how to eradicate poverty from thousands of citizens worldwide.  This program represents a historic and significant initiative for the Bank as it aims to  eradicate rather than reduce poverty, as had been the stated policy up to now.  As Kim stated in a speech in Tokyo in October “it is time to move from dreaming of a world free of poverty to achieving it, it is time to bend the arc of history.”  This new policy builds on the efforts by former president Jim Wolfensohn who first focused the Bank’s sights squarely on reducing poverty when he was at the Bank from 1995 to 2005.  Wolfensohn was the one who had the mission statement “dreaming of a world free of poverty” etched on the wall of the Bank’s lobby which some considered naïve or wishful thinking at the time.  Coincidentally, it was quite fitting that Kim hosted Wolfensohn at a ceremony at the Bank on December 3 to formally name the Main Complex Building’s Atrium in his honor, as Kim will now try to realize the vision left by Wolfensohn.

It will be interesting to see if the Bank-watcher and other advocacy CSOs will follow Bono’s lead in supporting the Bank’s renewed and strategic poverty eradication efforts.  There has already been some criticism expressed by several CSOs on the new President’s emphasis on poverty eradication and transforming the institution into a “solutions Bank”.  The Bretton Woods December 2012 eNewsletter, for instance, carries the views of an African CSO leader which  states that Kim’s new directions represent only “another public relations exercise”.  “When he talks of ‘non-ideological solutions to development challenges’, this is nonsense because the World Bank will always try to impose those ‘solutions’ with its ideology.”  This position not only reflects a general critique of the Bank’s overall macro-economic paradigm, but is also driven by a focus on specific policies – such as safeguard policies, climate change, and human rights – which they feel are more pressing than the Bank’s broader policies.  For this reason they often ignore the Bank’s poverty reduction polices and view them as distractions or public relations ploys.

In my experience, there is precedence for this tendency to ignore broader and more significant policies in favor of what are perceived to be more pressing and narrow issues.  I experienced this phenomenon in Brazil when I worked for the Inter-American Foundation in the 1990s.  While Brazil was in the midst of consolidating its democratization process and still struggling with political polarization around such issues as corruption, deforestation, and land reform, a group of CSO leaders launched a bold and improbable anti-hunger campaign in 1993.  The Citizen’s Campaign Against Hunger was broad-based and non-partisan in scope, and even leveraged the support of the private sector and the military.  It was led by one of Brazil’s best-known CSO leaders, Herbert “Betinho” de Souza, who had to face the opposition from those on the left and the right who considered the campaign naïve and a distraction from the ongoing single-issue policy debates.  In underscoring the moral imperative of fighting poverty, Betinho noted  that “old ideological barriers reminiscent of the Cold War need to be replaced by a more pragmatic search for effective solutions to pressing human problems.”

As it turned out, the anti-hunger campaign was quite successful and caught the imagination of the country.  It mobilized three million volunteers, distributed tons of food, and prodded local governments to improve social services for the poor.  What was perhaps most significant, the anti-poverty policies tested during this CSO campaign were instrumental in shaping the food security and anti-poverty programs – Fome Zero and Bolsa Familia – adopted by the Lula Government beginning in 2002.  These in turn have had a transformative impact on Brazil’s seemingly intractable poverty rates, cutting it by half and lifting 28 million people out of poverty in the past decade.

In closing it will be interesting to see how international Bank-watcher and other policy advocacy CSOs will respond to the Bank’s new emphasis on poverty eradication.  Will they see it as a historic and significant new policy they should actively support or rather a distraction from their single-issue approach to Bank advocacy?  Having experienced first-hand the key role the civil society anti-poverty campaign played in poverty reduction efforts in Brazil, I hope that international CSOs will embrace the Bank’s renewed anti-poverty efforts as it could prove to be one of the most significant policy directions the Bank has adopted in its 65 years of existence.