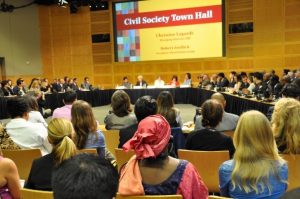 The participation of civil society representatives at the World Bank and IMF’s Annual Meetings, which brings together the world’s finance ministers to discuss international development policy, has grown steadily over the past six years.  The most recent Annual Meeting, held in October 2011, saw the largest CSO participation to date, with a total of 600 CSO representatives from 85 countries in attendance. They represented a variety of civil society constituencies: non-governmental organizations, youth groups, foundations, faith-based groups, and trade unions.  They came to discuss a broad range of issues ranging from financial transactions tax and aid effectiveness, to energy policy.  In order to ensure that Southern CSO voices are also heard, the Bank and Fund sponsored 60 CSO and Youth Leaders from developing countries to participate in the Meetings.

CSOs participated in the Civil Society Program which included an orientation session on the World Bank and IMF, Civil Society Policy Forum, and participation in the Program of Seminars. The CS Policy Forum, held on September 21 – 24, comprised over 50 policy sessions on a wide range of topics.  There were substantive and constructive sessions organized by World Bank and IMF units, but the majority was organized by policy advocacy CSOs such as Bank Information Center (BIC), Oxfam, World Resources Institute, and Global Witness on such topics as aid effectiveness, extractive energy, disaster management, and the financial transactions tax.

Two highlights of the CSO Program were the CSO Roundtable with Executive Directors and the CSO Townhall with Mr. Robert Zoellick and Ms. Christine Lagarde.  The CSO Roundtable had the participation of some 80 CSO representatives and 20 Executive Directors or alternates from the WBG and IMF.  The CSO Townhall had some 250 CSO representatives in attendance.  It was chaired by Ms. Ingrid Srinath, Secretary General of Civicus, and two CSO discussants – Ms. Laila Iskandar from Egypt, and Ms. Milwida Guevara from the Philippines – provided initial remarks.  The main issues discussed at the Townhall were steps taken by the Bank and Fund to respond to the global economic crisis, Bank’s energy policies, and ways the Bank can work more closely with civil society.

The Bank undertook several steps this year to mainstream CSO participation in the broader Meetings.  This included: organizing bilateral meetings for sponsored CSOs with all six regional Vice Presidents or senior managers; organizing the CSO Roundtable with EDs; and inviting 80 CSO and Youth Leaders to attend the Opening Plenary.  It is clear that the growing  participation of civil society in the Annual Meetings enriches the event by allowing new and often critical voices and perspectives on the major issues to be heard.